A Visit to a Japanese School

After his time conducting some high tech business meetings, Luke visited a prestigious private high school in Tsukuba, Meikei. This school is world renowned. About 200 of its students even LIVE on campus because their far-away families feel that it is that important for them to study at Meikei. You can read more about the school, see pictures, and learn a little about what it's like to live there here. 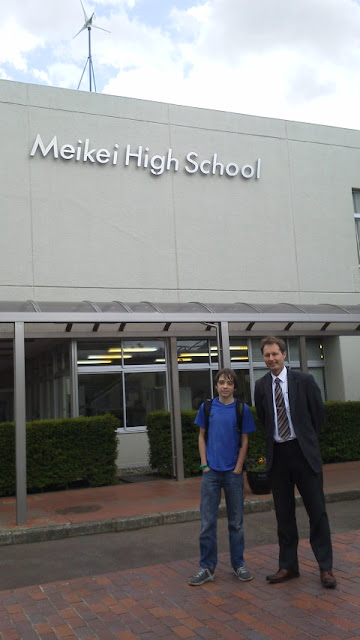 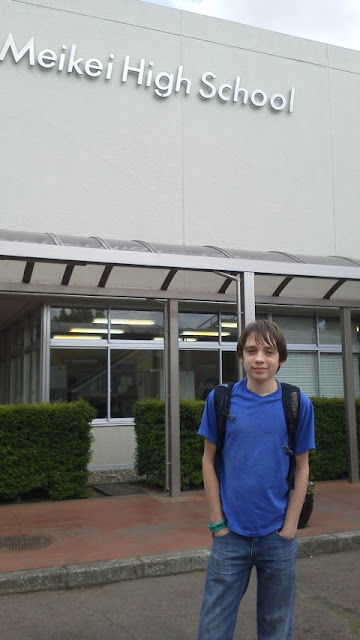 The man you see pictured above is the English teacher at Meikei school. Luke spent some time with him and the 7th graders.

One thing that Luke would have noticed right away, is that he was a bit underdressed. Japanese kids wear uniforms to school, whether they attend public or private school. This would mean button down shirts for boys and girls, nice pants for boys, skirts for girls and vests or suit jackets and ties. When you visit Japan, you are very likely to see lots and lots of kids in uniforms attending field trips.

You can see in the photo that Luke has a backpack on. Elementary school kids in Japan get a VERY nice, very expensive, leather backpack for school when they begin first grade. It is a kind of rite of passage and meant to be an heirloom that lasts them through elementary school. Lots of people hang on to them as a souvenir of their childhoods. See those special backpacks here.

At Meikei school, Luke first introduced himself to the class and then took questions. He said that they were interviewing him because they will be writing a paper about his visit in English next week! The kids were all very surprised to hear that he was a homeschooled student. They had heard of this before, but had never met someone who was a homeschooler. It is not a very common practice in Japan.

After his interview, Luke passed out some M&Ms, Starbursts and American Flag buttons and then joined them in taking their English test. He passed. Hooray!

Luke said that he was surprised at first that some of their test words were not what you would expect from 7th grade foreign language studies. For instance "unaccustomed" and "jealous" were on the test. (You had to choose from a list of words to complete a sentence in English.)  A few of the students have spent time living abroad with their families though - in Canada, America and China for example - so they are further along in their language studies than a typical American middle schooler would be.

After English they went to the art room. Luke was so impressed with this. He said that he got to look at the end-of-year projects of some of the 10th graders. Their year-long goal is to study and recreate a masterpiece of their choosing. He said that he'd be hard pressed to tell the difference between the originals and the reproductions. He was particularly taken with one student's reproduction of a Boticelli piece. He said it was "ridiculously close to the real thing".

Finally, Luke was able to attend a practice session of a Japanese sword fighting sport called Kendo. You can read about that here.

Overall, Luke said that he was so impressed with the school and the students. It was a great experience for him.

Funny though, isn't it, that the first time Luke spent time in a real honest-to-goodness school was in Japan?