Luke Gets Down to Business

Part of the series of events that lead Luke to being able to take this incredible journey to Japan is that his Dad, Eric, worked for a Japanese circuit board sales company for many years. The owners of the company are Luke's hosts there now.

Luke got a chance to join them on Monday at the office where his Dad spent many hours working.

To get to the office, he rode a train with his hosts. He's been on several trains while in Japan and is an old pro now.  He said that one of the things that struck him most about his time there is how easy it is to get anywhere you want to go using public transportation. He said that the system is so well organized, and the maps and stations so clearly laid out that he felt confident that even a young kid who didn't know the language well could go just about anywhere alone.

At the office, Luke was able to attend a meeting and get a little taste of the high tech business of Japan.

Here he is with some of the other people that once worked alongside his dad. 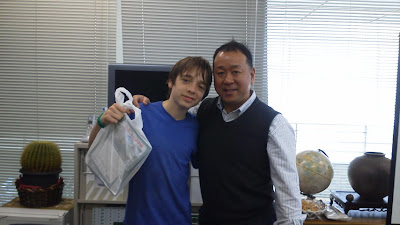 Ishii met Luke when he visited Austin a few months ago. He came with gifts for all of our boys then, and he brought more surprises for Luke during this visit to the office. 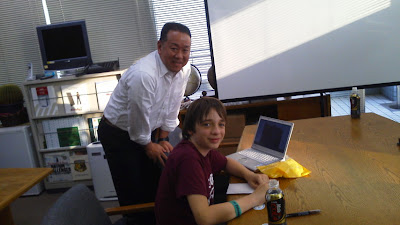 And here is Luke with Sagara (whose family spent time with Luke earlier in his trip). 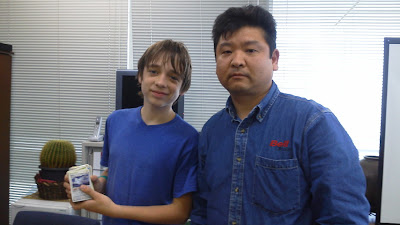 Here Luke is holding up some American style Pokemon cards that he was sending home with Sagara as a gift to his sons. I've heard a few rumors that he's coming home with MANY Japanese style pokemon cards. :-)

This gift trading is about kindness, and friendship, but it is also a tradition of sorts in Japanese business.

(and for the record, I have no idea how the boy managed two different shirts in one trip to the office. Hmmmm)